Most of us probably have at least some familiarity with Charles Dickens’ A Christmas Carol, the 1843 novella that tells the story of the miserly, Christmas-hating Ebenezer Scrooge who is visited on Christmas Eve by the ghost of his former business partner and the spirits of Christmas Past, Present and Future. But do you remember the characters singing and dancing and telling jokes? Or recall a scene-stealing, spotlight-seeking Tiny Tim? No? Then you haven’t experienced Uptown Scrooge, the topsy-turvy retelling of the classic Dickens tale performed live by Good Medicine Productions against the charming, historic backdrop of Uptown Westerville. 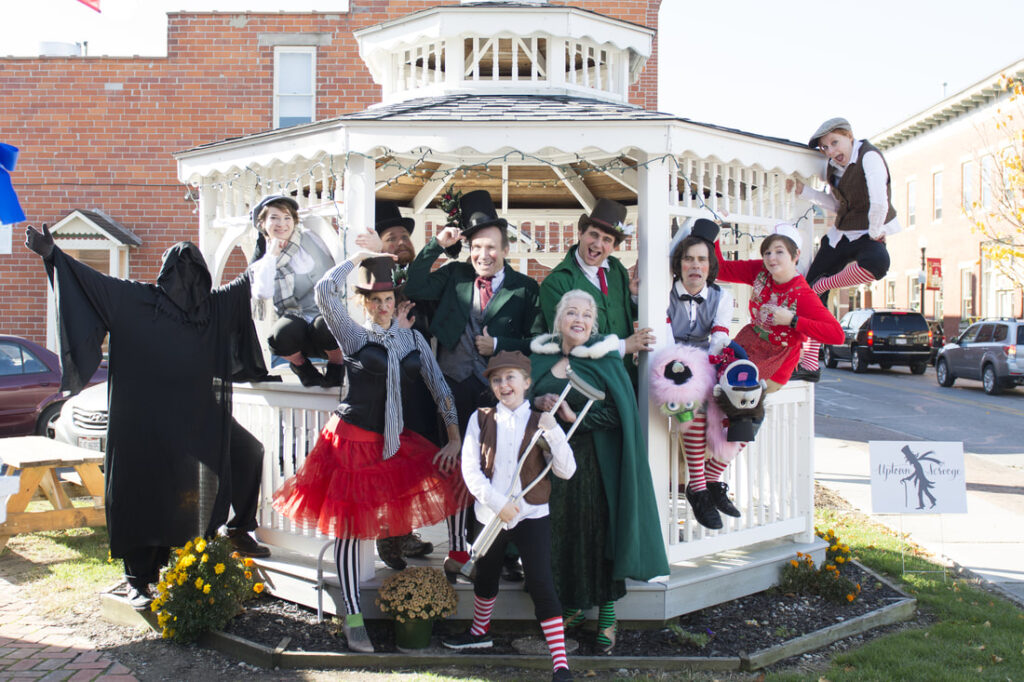 The brainchild of Kristie Koehler Vuocolo, the founder and artistic director of Good Medicine Productions, Uptown Scrooge is essentially a walking tour of Uptown Westerville that includes active audience participation within an immersive and interactive theatrical production. “Dickens’ story is the umbrella and we’ve taken it and twisted it and made it our own,” explains Koehler Vuocolo describing the off-kilter take on the well-known tale.

While there’s plenty of zaniness afoot, the production also tackles some serious themes, particularly during the visit by the Ghost of Christmas Present. Koehler Vuocolo re-vamps this segment every year to address current social and societal issues at the forefront of our everyday lives, striving to provide a “balance of poignant moments and absurd, ridiculous moments as well.”  While the play takes a serious turn here and there, the playful antics of the high-energy cast are always right around the corner – sometimes literally! And it’s not just adults who will appreciate the hijinks. “Kids especially love the visuals and silliness;” Koehler Vuocolo reports with a laugh. (Recommended for ages 4 and up.)

And those locations include some iconic Uptown Westerville shops like Java Central, Grandfather Clock Co. and Amish Originals. Recalling how accommodating the Uptown merchants have been from the beginning, Koehler Vuocolo describes them as “fantastic to work with.” Initially steeling herself for a few “nos” when she first asked for permission to perform in their shops, she heard only a chorus of “Yes, absolutely!” Emphasizing that she has nothing but praise for the Uptown shopkeepers whose collaboration is an essential element of the production, Koehler Vuocolo says, “A big part of why we do this is to show off Uptown, to show off the stores. The merchants have been wonderful. I can’t say enough about the spirit of the Westerville merchants. They’re awesome! ” 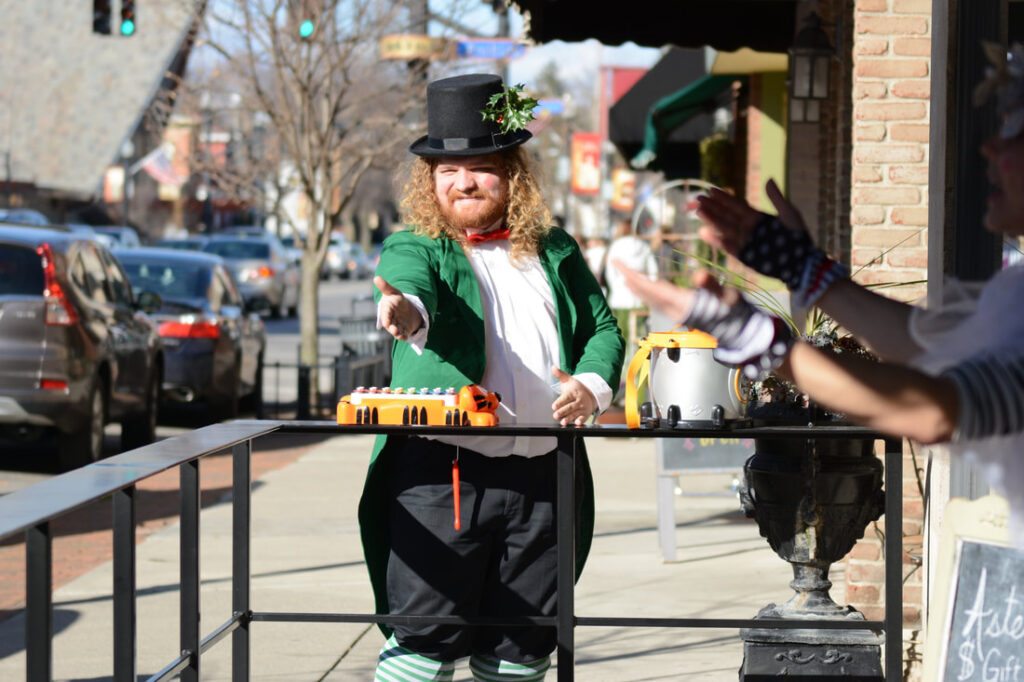 Westerville-based Good Medicine Productions was launched by Koehler Vuocolo, an actor, performer, teacher and creator whose credits include extensive theater work in Chicago. Needing to reconnect with her love of performance and theater after moving back to Westerville, she began creating a theatrical piece that would introduce her to the community and allow her to meet other actors and performers in the area. That work was Uptown Scrooge and its debut in 2016 was an immediate hit – so much so that it has become an annual holiday staple in Uptown Westerville ever since. The success of Uptown Scrooge heralded the arrival of Good Medicine Productions, a troupe of professional actors and performers whose mission is: “To bring humans transformative joy through the art of improvisation, comedic performance and innovative storytelling.”

As part of that lofty mission, Good Medicine Productions has been dedicated to performing for pediatric hospital patients and elderly residents in senior living and nursing home facilities. “Uptown Scrooge was so successful that first year it gave us seed money to hire and train our ensemble to [perform in] the nursing home and pediatric program,” notes Koehler Vuocolo who clearly has a soft spot for the interactions Good Medicine Productions has fostered with the pediatric and senior communities they visit. “We’re not just there to do a show,” Koehler Vuocolo explains; “Our therapeutic clowning engages them with singing and participation, it’s about empowering them.” 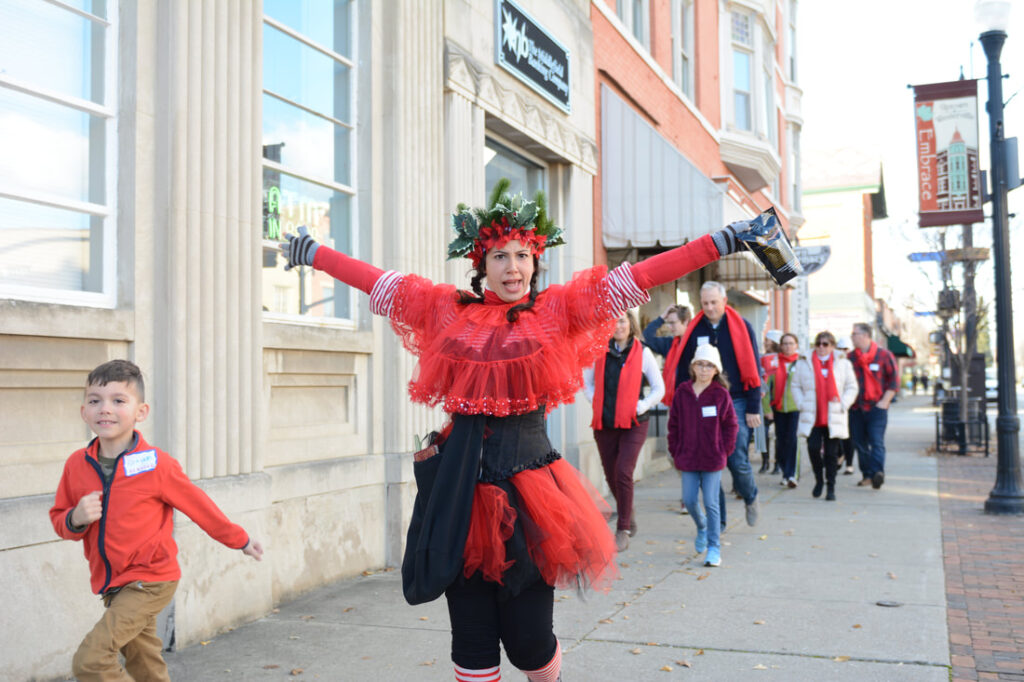 Whether it’s in a hospital, nursing home or the streets of Uptown Westerville, Koehler Vuocolo and her band of theatrical merrymakers just want to lift people’s spirits; “Our goal is for our audiences to find their joy and we are the catalysts on that journey.”

Tickets for Uptown Scrooge go on sale November 1 and can be purchased at the link below. Performances begin November 27 and continue through December 18 on Saturday and Sunday afternoons.